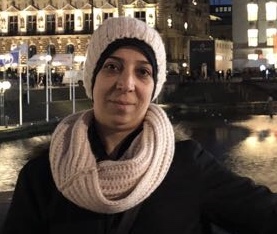 I came to Denmark 15 November 2015.
Before the war, I had a beautiful life. I am a certified lawyer. I use to go all over the place, to visit, to parties and to live life.
In Syria, I worked as a manager for the employees. My husband was able to escape the war by going to Saudi Arabia, and went on to Europe. I was waiting for family reunification. Because I am from Hama also, I was very afraid that the Assad regime would catch me. They had arrested my husband and tortured him, before he was able to escape. Assad’s father, Hafez Assad, had killed all the men over the age of 16, in my hometown. There was a long history of violence in that city from the Assad family.

After my husband escaped from Syria, the regime was after us. They kept knocking on the door, looking for him. My daughter was very afraid. I had to escape. I went to my husband’s sister in Lebanon to stay for four months. Thereafter I escaped to Saudi Arabia to stay with my husband. I stayed there with him for eighteen month. Then he fled to Europe. It was too dangerous for my young daughter and me to go on that trip with him. I stayed in Saudi Arabia on my own for a year. It was extremely difficult for me as a woman to be alone in Saudi Arabia. I could not walk alone outside and nor could my daughter. I worked for a woman in a salon to get money and she had to pick me up and drive me home every day. After 8 month, my sister fled to Germany. I stayed alone in for another two month before travelling to Denmark together with my three-year daughter.

I travelled to Turkey and from Turkey to Greece in an inflatable boat. I do not want to talk about that trip because it is too hard for me to think about it. From Greece, I came to Denmark via the Balkan route.
When I came to Denmark, I stayed at a camp in Ribe in Jutland. Then I went to a refugee camp in Roskilde. After I got permission to stay, I lived in a shared house in Snoldelev. Finally, I got an apartment in Roskilde.
I am at an internship at a kindergarten in Denmark. I would like to say to the Danish government, that they should be friendlier towards us. They are changing the laws, and make us feel very insecure. They talk badly to us, and force us to do things. Why do they not communicate in a more friendly way? I feel uncertain for my daughter’s future. because I so not know how they will treat her. Will they send her back to Syria one day? Can she build a life here?