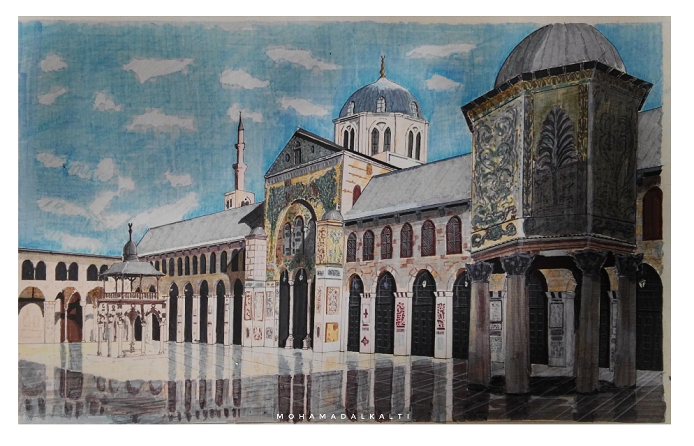 My name is Mohammad Al Katli, I am 26 years old and come from Syria, from a place called Zabadani. Zabadani is a tourist spot, one of the most important of its kind in Syria. In summer it is visited by many tourists from Dubai and the Emirates. There is a lot of nature there and fruits, Zabadani is known for his apples. I lived there with my family, we are a religious family from the middle working class. We earned our living by renting out villas, my father also worked as a hairdresser.

My city was the first to be occupied by the Free Army, making it a target for the regime. This had many consequences for us. The educational system, for example, was under the influence of the regime, because we were students from Zabadani, we did not get enough points at the Abitur exams, which is why we failed, although according to our performance we deserved a much higher score. My dream was always to study architecture, I couldn’t do that with the low score. So I went to Lebanon for a while. Before I left I got to know a girl and she took her Abitur together with me. I fell in love with her from the very first moment. But I could not tell her because everything before me was still uncertain.

In Lebanon I searched for her name on Facebook, I found her and we wrote each other. After a while I confessed to her that I had fallen in love with her. At first she was reserved, but later a love developed between us. I worked in Lebanon, but then had to return to Syria because of my military duty. But if I had not returned to Syria at that time, I would not have been allowed to enter, so I went back to Syria. My friends told me that the points on the Abitur examination were all corrected, I got my actual score and was finally able to study my dream subject of architecture. I met the girl and she became my great love. Since my studies began later, I worked in Lebanon for another year and then, when I return, studied together with my love. She was in the same university as me.

We studied together and I asked her to marry me. We were both engaged and wanted to go to Australia, where my sister lives. In Syria I could never have afforded to get married. The costs for my university were so high that I spent all my earnings on it. My family came especially from Lebanon for the engagement. We waited one year for the visa for Australia, unfortunately we never got one. Meanwhile the problems in my city became bigger and bigger, the Syrian regime attacked. Because our city was a red rag for the Syrian regime, every student, whose identity card showed the place of origin Zabadani, was taken by the soldiers during controls. War, war, war, everywhere was only war. One could no longer walk normally through the streets. For this reason I decided to leave my homeland and flee to Germany. Unfortunately my great love had to stay in Syria.

If I would tell everything, I think even stones would cry if they heard of my story. I fled with the brothers of my fiancée to Germany, we arrived there in a camp and stayed about three months. Arriving in Germany, I only felt relief. We had an exhausting journey, especially the way via Hungary was hard. All I wanted was peace and quiet and sleep, just peace and quiet. The feeling of relief left me quickly, because my great love was still in Syria. I was very afraid for them, because the regime meanwhile took with it the families of the men who fought against the regime. They locked them up and locked them away from food and water. Many families died of hunger. In Germany I was very worried about my wife’s family because they lived near Damascus. The worries made another person out of me, usually I am always calm, but because of all the worries about the family, I became aggressive, restless, people did not recognize me anymore. My wife and her family fled with a smuggler. On 15.12.2015 my great love arrived in Germany.

When I saw her, I lost every fear and every worry. It was over, the burden is gone. She is here, with me. Of course it hurt me that my relatives were still there and the people of my country, but my life was now with me and my parents in Australia. In Germany it was very difficult in the beginning, I got after one year my stay. The search for an apartment was also very difficult. Today we live in Wesseling. We started a language course together, my wife and I. After the course I enrolled in the Technical University. I was accepted and would like to study architecture here. My wife was accepted at another school and would like to study civil engineering. My dreams for the future, I would like to finish my studies and do a Master. I would also like to visit my family but at the moment I am not yet allowed to leave.

I can tell the people who have not shared their story yet, don’t be afraid anymore, it’s over, we live in safety now. To tell my story means for me to have gained time to give a small part to the project and to give other people the possibility to understand me better. I have only told an excerpt, and if this helps to put ourselves in our position as Syrians better, what would happen if we were given more time to speak? How many people would then understand us better? With my story I hope to have made a good start.