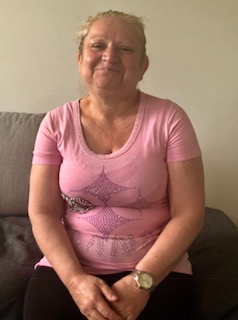 Entisar Youssef is 50 years old and from Qamishli, Syria.

I came to Denmark in 2014. I am from Qamishili in Syria. In Syria, I worked as a chef in restaurants.
Before the war I lived a very nice life. The war came to Qamishli in the beginning of 2014. I am a Christian and ISIS killed all the Christians in Qamishly, so I had to escape. All of my relatives escaped before me. I was the last one to leave. I escaped alone to Turkey. From Turkey I took a boat with 30 people to Greece. They threw all my bags in the water. I spent 35 hours in a very old boat. I wore a lifejacket. There was many people. I felt like I could not breathe. The captain of the boat made a mistake, and took us to Samos instead of Lesbos. We got put in a military prison for 20 days, without anybody talking to us. When we were released I went to Athens, where I met an Asian man who promised to help me get a plane to Denmark. I had to pay $10.000 to get a fake passport and a plane ticket. The guy put my picture in the fake passport. When I got to the passport control in Athens, the authorities looked at my picture and back at me for 10 minutes. The plane was waiting to take off, so they let me pass. I was very nervous.

When I got to Denmark my sister picked me up. She lives in Aarhus. There was no police at the airport in Copenhagen, so no one discovered me. I just left with my sister. After a while I got send to Sandholm and had my fingerprints registered. After that I was sent to Helsingør to the asylum center. Then I was sent to Sønderborg, then Nyborg. Then I got permission to stay and I had to stay at a hotel for 20 days. Then I went to Aarhus. I did not like it in Aarhus. I am a good chef and I got a job in an Arab restaurant, where I was treated very badly. For that reason I went to Copenhagen, where I found a new job as a chef.
I do not like the life much in Denmark. It is very stressful. We work very hard and do not have time for pleasure. In Syria we did not work as hard. We finish every day in the afternoon and had plenty of time to be together with family and friends. Here in Denmark everyone is running around all the time and are stressed. We did not get so much salary in Syria, but food was cheap. For 100 Syrian pounds I could buy many things. Now after the war things are very expensive.
I feel like the Danish people are very closed towards new people. And also as a distance. I feel like some other Muslims judge me because I am Christian. I also feel like we are refugees are being exploited in the workplace. We work too hard for too little. I wish I could go back to Athens because there are many restaurants to work in or maybe in Malmø I do not feel comfortable here. I feel very controlled by the authorities in Denmark.