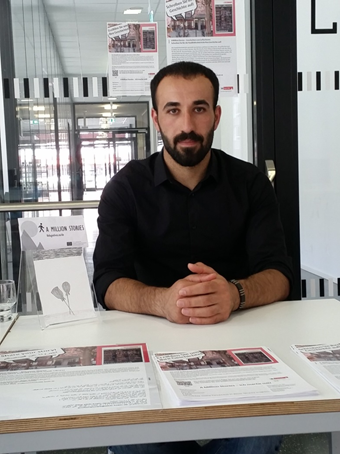 My name is Zinar Rojhilat, I am 23 years old and come from Iran. Everyone is aware of the major problems with the state, politics and religion in Iran. We live as Kurds and Sunnites in a minority. Most people in Iran are Shiites, they don’t want Sunnites in Iran.

I had problems because of religious and political reasons. I studied in Iran and wanted to work in the university, they told me that they could not give me a job as a Sunnite Kurd. Only Persians, Shiites got a job. I studied entomology for three years, after that I wanted to do research or something in the field of entomology. With me was a person studying, he studied something completely different, in the last semester he then joined. His father was also an entomologist. He got a job after his studies, although he only studied for a year. I studied for three years and got no job. He was Iranian, Shiite. I was Kurd and Sunnite.

In Iran, nothing worked without connections. My work depended on one person signing it, he asked me everything except what I learned. When he discovered that I was a Sunnite and my grandfather was with the Peschmerga, a Kurdish freedom movement, he accused me of it. I had nothing to do with it, my grandfather just wanted to protect his family. I never got an answer from him. The interview took place shortly before I graduated, I dropped out of university, I wouldn’t get a job anyway. They took away my hope.

I had to leave Iran for political and religious reasons. I was in mortal danger. In 2015, I fled to Turkey. After six days I took the rubber dinghy to Greece. We were seventy people in the boat, it was not longer than 8m and not wider than 3m. There were children in the boat with us, they had to squeeze between the passengers. Three hours we drove on the water. They cried, I could not stand to see it and took two children on my lap. I played with them until we arrived in Greece.

We had to wait more than thirty days at the Greek-Macedonian border because the border was opened only to Syrians, Afghans and Iraqis. At some point we got lucky and crossed the border. In Macedonia we were given a document with which we went to Serbia. We were driving a cattle truck, it was terrible. In Serbia we got another document, we waited for the train.  We drove again with a cattle car to Croatia, it was a very long drive. We’ve been standing all the way. I could bear to see the women and the elderly without being able to help them. I could barely stand it.

The journey from Croatia to Austria was already better. The cops were nicer and the Trains were real trains. No cattle trucks. We arrived in Austria, where we waited three hours. We got waiting numbers and when we were called they asked us where we wanted to go. I wanted to go to Sweden. We got on a bus, policemen stopped us at the German border. They took us into a building. We were stripped, checked and examined. It wasn’t that bad. After two days they gave us the address of a home. We went to the home.

We went to a stop, we stayed there for half an hour until we were sent away by security guards. We had to go out into the cold again. We stayed outside and waited until the first train arrived. We could neither sit nor sleep, we were tired and could do nothing. It was snowing.

The first train arrived, we drove to Munich Central Station. I called my uncle and told him I was in Germany. I told him that I couldn’t do anything, that it was very cold and if it stays that way, I’d rather kill myself. I was exhausted and reached my limits. My uncle called a friend from Munich to call me and pick me up at the station. He called me, I waited six hours at the station until he picked me up. He came and we went to his house. I stayed there for a few days.  My cousin was also on his way to Germany, after I was in Munich for four days, he called me and told me he had arrived.

He was really lucky, he came to a nice home in Hamburg. I arranged to meet him in Hamburg the next day. I went to Hamburg and we met there. We bought a ticket to Denmark. My uncle ordered it for us on the Internet, we should have printed it out, but we didn’t know that. We were checked on the train to Denmark. I showed the inspectors the barcode, he told me it wasn’t enough. The police came and took us to the station. We’ve been controlled.

My cousin was taken back to the home, I had to go back to Munich. I paid for the trip myself from my last 40 €. I waited seven hours for the train, it was terrible. Once again I had to wait. I said I was going back to Iran, I lacked the strength for more burdens. I was very tired. I’d get in big trouble in Iran, I’d put up with that. I had black fingernails, I was angry because I couldn’t understand why it went like that, I was angry because I lacked the language to speak.

I called my uncle, he told me to get my cousin, he would send money again so we could go to Denmark. After two hours, I saw a dark-haired man at the station. I approached him and it turned out that he was also a Kurd. He listened to my story, he had a boat ticket that would take me all the way to Denmark. Without problems, without control. It was like a dream for me. When I called my uncle again, he told me I could drive. But I couldn’t. My cousin was young and he needed me. I told the Kurd that unfortunately I could not go.

He told me that he was driving to Hamburg and that I was welcome to come with him, so I did. The trip took about three hours when I arrived I called my uncle. He told me he had a friend in Düsseldorf I could go to. I had no more money for a ticket, I had to dodge paying the fare. On the way I was checked and had to get out. After an hour another train came, I got in. This time again I was checked, I got a note and was allowed to remain seated. A friend of my uncle’s picked me up in Düsseldorf. I called my cousin at his house.

He was fine where he was. He had his own room. I told him to come to Düsseldorf if he wanted and that I would not go to Sweden but stay in Germany. I had no more strength to travel. He wanted to stay with me, too. After three days he came to Düsseldorf. One night before we wanted to register in a camp, I woke up to have a drink. I became very dizzy and fell on the ground. I got unconscious, when I woke up I couldn’t feel my arm. I thought it was fractured. After a while I was fine again, but the pain made me unable to sleep. When my cousin and my uncle’s friend saw me like this, they called the ambulance. They checked me at the hospital, they told me I had nothing.

We registered at camp, I took strong painkillers. It got better at some point. We stayed two months in the camp, then we came to Cologne Ostheim to a camp. It was just carnival in Cologne, we had never seen anything like it before. We went to the main station to see the people. After ten minutes we were stopped by police officers. We had to stand against a wall while they checked our papers. We were ashamed and looked only at the floor. I felt like a terrorist. My papers were fine, but my cousin had a problem. I didn’t understand, so I called an Iranian doctor who translated on the phone. He solved the problem. Until today I don’t know exactly what it was After this incident, we never left the camp any more. After ten days we calmed down and understood that the police only wanted to protect our country. After one year I received a letter from the BAMF, I was allowed to register for a German course. A short time later I was also invited to the hearing. At the hearing, they ask me questions. We were fifty people waiting for their hearing. The next day they all got their identity card with the stay for six months. Not me. I was supposed to come back for two weeks. When I did, they told me to be back in a week. This time I finally got the stay.

I went to the German class and soon had my second interview. Again I told my story, the reason for my escape and everything that happened. I got stay for three years. Now I live here and everything is normal. I would like to take the B2 language course, then continue to the C1 language course and then I would like to do an apprenticeship. I don’t have time to study. It’s not just about me, I think about my family, I’m the oldest and I have to take care of them. I’m in charge of my family.

In Iran, my dream was to study medicine, but I couldn’t because of my background and religion. I also lacked the money, because with what I earned, I had to help my father. I don’t dream for myself, my big dream is to help other people and do something good for them. I may not offer much, but if I only help someone who has no legs to walk, it’s a big deal. My wishes, I don’t want anything for myself, I want to help people. It’s my big dream that I do something for other people.

I always did everything for others, I studied for my family, worked for my family. I just want to help people. I wish that there are more people who want to help, I wish that we hold together, because one hand alone cannot clap. Only together we can do it. “We” means all of us. When I told my story, I felt my way back into that time. I could tell a lot more for the people, but it would take more time.  In Iran, a big problem is that we cannot speak, we are not allowed to speak our minds, we have to share our ideas and our thinking with other people. We need this. It is also my wish that all children have the same chances.