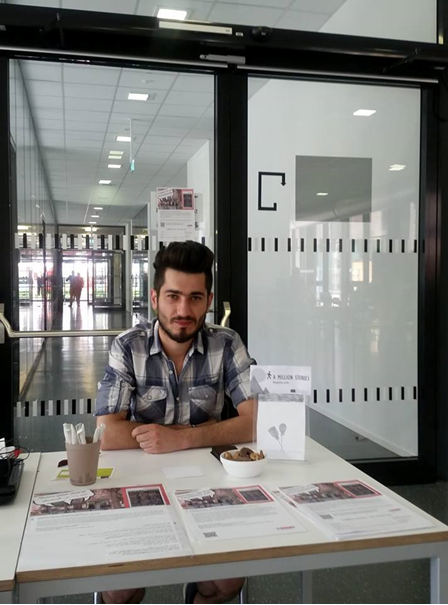 My name is Milad Georges, I am 27 years old and come from Syria. Before the war I went to university, I was in the third semester when the conflicts began and started to spread everywhere. I come from a city called Hassaka, in Hassaka live different peoples, a colorful place, almost like Cologne. Kurds, Arabs, Armenians, Assyrians, all nations lived together. A place of diversity.

We have not seen the kind of destruction that the people of Homs, Aleppo or Damascus have seen. In our town, conscription was a big problem. Every boy over 14 had to go to the military, carry a gun and kill without a specific target. I was still a student and very active in aid organisations. I didn’t want to be a soldier and kill people, neither for myself nor for my siblings. I didn’t want to kill someone I don’t know for a reason I don’t know.

I had to get out of Syria after graduation. The decision was very difficult for me. Everything is there, my memories, my family, the woman I love, leaving all this was a very difficult decision. But the price I would have had to pay was so high that I had no other choice. It was not easy to leave everything behind me, but easier than to become a murderer and kill innocent people. So, I decided to escape. I had no choice, either I kill or I get killed. There was no third option. I said goodbye to my father, he was ill at that time, he died one week after my escape. I left everything behind me, everything left me behind. May my father rest in peace.

I worked for a while in Turkey, later I left Izmir with a rubber dinghy. The boat was for a maximum of 15 people, we were 40 people. We drove to Greece, we stayed there for three weeks. From Athens we drove to Thessaloniki. I remember the route from Thessaloniki to Macedonia very well. We walked, 213km. I’ll never forget that number. We experienced all the bad things you can imagine on this route. It took us ten days from Macedonia to the border. There were days without food, we ate from the trees. The time in Macedonia was hard, the government forbade us refugees to use public transport. The people, though so poor, helped us a lot, they were incredibly generous. I was given a jacket by a poor man, they gave us what they had.

Unlike Serbia. In Serbia we were allowed to use the train, but neither the people nor the government helped us. We weren’t allowed to rent hotel rooms, so we had to sleep in a garden. Once we were even sent out of a garden. At the border to Hungary we were stopped by the Serbian border control. They arrested us because we had no papers that allowed us to be in Serbia. We could not have had these documents either, because Serbia did not register any refugees during this period. It was pure harassment.

My friend and me filmed the escape, we filmed the arrest and the prison term. In prison, I asked the officer for a cigarette. I can’t explain where the courage came from to ask him, I just did. While we were both smoking a cigarette, me and the officer, I negotiated our release with him: “Each of us pays you 100 euros and you let us go.” We also filmed this moment, the moment a Serbian officer takes corruption money. They took us to the Hungarian border. We were very afraid because in Hungary the gates to Europe begin and the dreams of the refugees stop when they are stopped there. Hungary was like a prison for the refugees. Whoever was stopped here lost all the way behind him. That’s why crossing the border was the most dangerous thing.

We tried many smugglers, but found none who helped us, so we decided to travel alone. The way was ahead, we couldn’t do more than try, so we tried. We tried, and we did it. We were in Hungary for nine days, the smuggler postponed our fleeing every day to the next. We waited in a room without light. Once a day we had something to eat, we paid for the food ourselves. We were picked up by a car, it was small, we squeezed ourselves in. 23 people were in that little car. The itinerary was planned to lead from Budapest to Austria and then to Germany. But after 20km on the highway the car got out of balance. In the middle of the highway, 23 people, among us were families with their children. The driver ran away, one of us hit the car doors with all his strength. Slowly we got out of the car, first the women and children, then the rest. We were running on the roadside.

Usually Budapest is the last stop for a refugee, from here it goes to Germany. Making it this far is a relief for everyone. We never thought anything could go wrong now. We were dressed nice and thought we’d be safe in three hours. We were already there with the thoughts. But now we were standing on the highway, somewhere between Hungary and Budapest. We could be stopped at any time and the month we needed from Turkey to here would be lost. The smuggler told us on the phone that he couldn’t do anything and we had to get along somehow. We walked for a day, our batteries ran out, the children got thirsty. It was getting worse and worse.

The families had to make a choice, whether their children would starve to death or they would turn themselves in. They could choose between their children’s lives and a better future. In reality, they had no choice, they turned themselves in. I’ll never forget this moment. For a sip of water that saved the lives of their children but destroyed the future of the family. We walked on without the families. By coincidence it was discovered that someone in our group had a relative in Bulgaria. He called him, then he sent him our location. The relative from Bulgaria told us that after 200 meters there would be a rest stop.

We were 13 people without the families. We were very sad about the families that surrendered. They could have eaten and drunk there, but we didn’t know. I remember very well that the sellers did not accept the euro, but some other currency, but we only had the euro with us. I asked her to make an exception and told her that we hadn’t eaten or drank anything in two days. I offered her 50 euros for a bottle of water, that was about 4 litres and 13 croissants. This was the most expensive water I have ever drunk. I missed the money later, but I had no choice. The car arrived at 3 a.m., after three hours of driving we arrived in Germany. I think of my family while I tell this, think of all the decisions of this escape. How I decided to flee my country in order not to kill anyone, and how the family decided to turn themselves in so that their children could live.

I have always liked Germany very much, human rights, freedom. The freedom we lacked in Syria and the reason we stood up to demand our rights. We did not want much, only the least, to express our opinions without being afraid. We demanded equality, demanded the dignified treatment of man, irrespective of his religion and origin.

In Germany I registered in a home, after two days I got a stay. I’ve lived in Cologne for two years. I didn’t know the language as a stranger in a new society. I lacked the key to understand the people who had helped me, the key to meeting new people. I wished to learn the language as soon as possible. I enrolled in an integration course, that wasn’t enough for me, so I searched the Internet for volunteer work. I wanted to give something back to the people, the land that gave me the chance for a new life. The country that gave me my rights without knowing me. All this without expecting anything from me. I started working in a theatre with underage children. It made me very happy because I studied literature in Syria and taught children as an Arabic teacher. I was able to live and pass on a part of what I lived in Syria.

Right now I’m preparing for my C1 exam. Tomorrow I have an interview with the university, I would like to study social work. I tried a lot with my certificate as an Arabic teacher, but it would take too long and I can’t wait, I want to do something. Through my voluntary work with children I was able to gain a lot of experience in social work. I often think of the children in Syria, to this day there are more than 3 million children there without school education. I would like to help the children in Syria with my knowledge.

Many people talk about the political and economic situation in Syria, forgetting to mention another side, the children. The future of children in Syria, this new generation whose future is threatened. The children of Syria. Our generation, at my age, either fight or die and the rest have fled.

A child aged seven can neither read nor write. It learns to hate and to be hated. Though we are all one, all Syrians. Syrian childhood is threatened and influenced by the schools that want to plant their opinions in the children. I have big dreams and maybe too big dreams, maybe I can help, that’s why I want to study social work.

When I decided to tell my story, I did it first because I am honest with myself. This makes it easy for me to share my story with people in all sincerity. My message to the people, I am a refugee, I have fled, but I am also a human being. I have many sides, good, bad. Get to know me as a human being and then judge. Before you judge, give me a chance to show who I really am. If a person has had a bad experience with a refugee, it does not mean that everyone is like this one. If I am one in a hundred who manages to change prejudices with his story, I am ready to tell my story my whole life long.