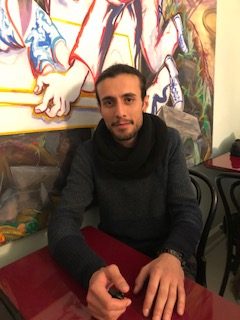 Almqdad is 26 years old and from Hama, near Homs, Syria.

I came to Denmark on November 30th 2015 and was granted residence permit in 2016. I just finished language school and will begin school at AVU.

I was born in a small town in Syria. Went to school for 12 years and then studied psychology at the university of Damascus. In 2012 I was sent to prison by Assads regime because I attended a demonstration agains Assad. When I came back out I couldn’t go back to the university again because they had removed me from the list of students of the university. That’s what the regime does when you protest against them. You lose your job, your life. Instead I started helping refugees who came from Aleppo. My friends and I made a small group who helped these people, but after a year and a half, Assads regime infiltrated our group. The persons who worked for the regime who was now in our group placed bombs and other things. So, our group stopped.

After that, I worked in a clothes store for two years and then left Syria. The regime wanted me to join their military, so I had to get out of Syria with my wife. I went from Tartus, Syria to Lebanon, and from there we flew to Turkey. In Turkey we sailed in inflatable boats to Greece. We went to Athens, and then to Makedonia, Serbia, Croatia, Slovenia, Austria, then to Germany and finally Denmark. We went by train.

In Denmark I was sent to Sandholm, then Allerød, Rødby Havn, Søllested and finally Frederiksberg in Copenhagen. I like Frederiksberg a lot. My wife and I just had a daughter, shes 6 months old now, and her name is Marianne.

I want to tell something I usually tell my Danish friends. Denmark is my second homeland. Denmark and the Danish population helped me so much, and they have been very open and helpful. Of course there are some things we don’t like about being here, but you will meet that feeling everywhere – and Denmark feels like my second home. Syrian people are like Danish people. We are all humans. That is it.