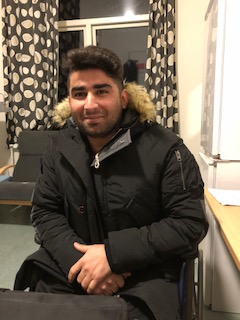 My parents are originally from Iran, but I was born in Iraq.

In 1981 when the war between Iran and Iraq started, it was the war between Saddam and Khomeini, the first Islamic leader of Iran. There was a time when Saddam was attacking Iran, they took people from Iran to Iraq, and let them stay in a village beside the border. It was at that time my parents came to Iraq, before I was born. Saddam did this because he wanted more soldiers to fight his war. They moved people to a camp, Altash. At that moment it was not even a camp, it was a desert. They just put people inside fences and told them to build houses for themselves, with mud and stones. My parents stayed at that place until they had 13 children. 5 girls and 8 brothers. They stayed there for 25 years. After that we decided to go back to Iran, because most of them were not political. Of course some were politically engaged and had to stay, so they could not go back to Iran.

Then we went to the town Javanrud. We started from the beginning. It was so hard because there were no job opportunities, and the Iranian government counted us as Iraqi people. Also the Iraqi government didn’t give us ID-cards, because they counted us as Iranian. When we proved that we were Iranian they first made another problem because government is shia, and I am sunni, so they didn’t want to give me an ID-card. The same for my sisters, because they had Kurdish names. All we wanted to do was get ID-cards in our own names, but they wanted to change our names. Most of the people of the town went to the government offices to complaint about them not giving us ID-cards. The people said it was necessary because Saddam took us, we had a hard life, and finally, we got our cards.

I heard the story of my childhood from my sisters. They told me about my situation from before I was born, showed me pictures.

After one year I came back from Iraq to Iran. Five of my brothers could not find a good life in Iran, so they went back to Iraq. My family managed to get one of my brothers back, but the other brother is still in Iraq. My brother who stayed in Iraq cant come back to Iran because he is political. The Iranian opposition party are all in Iraq because as well as the Kurdish party. My brother works in a party called PAK.

In the middleeast we have a big issue with something called Kolbar. It is a term used about couriers that go to Iraq to collect “rare” things and bring them back to Iran. The things are ordinary things like food, clothes etc. We do this kind of trade because the taxes on goods in Iran are so high. If the Iranian government find out, they will shoot the courier. The couriers carry the goods over the border, and I was that kind of courier. This was my job. I started doing this in 2012. One day my brother in Iraq, who worked for PAK, started giving materials to take to Iran. So I was courier of propaganda for the Kurdish party, bringing it across the border. I had to hide the box of political material inside a bag of other goods, like food or something else. One day, in 2015, when I was doing my job, the border police Sepah, shot at us. I just dropped my bag, and ran back to Iraq. In my bag was my ID-card and the political material. The sepah went to my parents looking for me. After that, I went to my uncles in Iraq. They took me to the party leader. They gave me a gun told me to fight against ISIS. They consider it to be my duty to help them fight ISIS. But, I did not want to fight. I did not want to take a gun, so I ran away from them too. And so I came here to Denmark in 2015.

I am 26, close to 27, and I have not seen ONE positive thing from that country. But I have been here in Denmark for 2 years, and I can mention thousands of things that are positive here. When I arrived here, I met up with a teacher from Hjørring. She calls me every week, twice. My mother doesn’t even call me that much. I don’t feel my country is a good country, but Denmark is a good country. Even though I have had a bad experience in Denmark because of my situation, I can still say that Denmark is a good country. I have a girlfriend here in Denmark. She has been in Denmark for 23 years. She is 27 now. I want to marry her and become a Christian.

I have proof of my story, pictures of everything, but the immigration services think I am a liar. I have my ID-card from my membership of the political party, the big opposition party to the regime in Iran. I can never go back.

I really love the people in this country, but I hate the government sometimes. I know people who have committed crimes in Denmark, and they still get permission to stay. But not me, and that makes me angry. I hate the government, I can say that a thousand times, because it is a free country! They change the laws every day, and that’s not OK! NO ONE leaves their country for nothing! They only leave because of the problems there. If this government doesn’t want me to stay, why wont they let me go to another country? I wanted to go to Finland, but when I got to the central station the police forced me to my fingerprints taken and seek asylum in Denmark. Why? If they don’t want me here anyway? If they don’t want me here anyway?